In all the time that I've been home brewing, I've never used the S-33 yeast, so I thought I'd give it a shot.  It sounds like it was good for pale ales, which I'm going to make with some Cashmere hops.  I've used this hop before, including to dry hop a Belgian beer, which my wife really enjoyed.

So far, I've made two variations of this beer (here, and here), and liked them both, which is kind of odd because I would not normally choose a brown ale, nor an English ale, for myself. If I had to pick one, I'd say that the first one came out better, but that may be based more on carbonation than anything else.  Or maybe the caramel rye added just a bit of spice to the beer.  Regardless, I'm going to try one more time, and then hold off on the Hobgoblin ale clones again until fall.

I thought that this time around, I'd try a different yeast, but also do something I haven't really done yet...document the process, in pictures.  A friend has been asking, again recently, so I thought this would be a good way to document not just what equipment I'm using, but also my process.

Figure 1 illustrates the equipment I use when making beer.  From left to right, there's a tray with a funnel, racking crane, and tubing.  I use the 1 gal thermos for partial mashing, and below that a digital kitchen scale and thermometer.  Next to the thermos is a 1 gal container of water with just a bit more than 1/2 oz of StarSan sanitizer, and below that is the glass fermenter.  Finally, on the far right is a two-gallon brew kettle.

The grain stays in the thermos for at least an hour.  It can stay longer.

Figure 2 illustrates the ingredients for this beer. There's the grain listed above, in a grain bag.  To the right of that are the two hops additions (see below), and then the DME.  At the bottom of the picture is 4 oz of table sugar, and the yeast packet.

Before the grain has completed processing in the thermos, I like to start heating 3 1/2 qts of water in the brew kettle, bringing it up to near boiling.  Once the grain is done, I then use thongs to remove the grain bag from the thermos, and then dunk it and remove it from the heated water in the kettle.  This water is at a much higher temperature than the water in the kettle, and as such, there won't be the extraction of sugar from the grain.  After doing this several times (I usually do so three times), I add the wort from the thermos and the other fermentables (DME, sugar) to the brew kettle and bring it up to boiling.  Once the wort begins boiling, I add the first hop addition, and begin timing the 20 min boil.  At 10 min into the boil, I add the second hop addition.

When the boil is complete, I move the covered kettle to the sink, which I've partially filled with water.  I then add ice to create an ice bath, and after about 10 -15 min, begin checking the temperature of the wort...I want it to get to about 80 deg F.  Once that happens, I begin transferring it to a sanitized fermenter.

When the fermenter is between 1/2 and 2/3 full, I stop transferring wort.  I put a fermenter cap on it (the cap has a hole in the middle), and begin shaking it to add oxygen to the wort.  I generally shake it for about 5 min, vigorously, add the yeast, and agitate again for a minute or two.

Once the yeast has been pitched (I tend to over-pitch, adding the entire sachet to the wort), I continue adding the wort until the fermenter is about full to the neck.  I then place a sanitized cap on the fermenter, place one end of a blow-off tube in the hole in the cap, and then put the other end in a Gatorade bottle with a bit of sanitizer in it...just enough to provide adequate cover for the end of the blow-off tube.

Once all this is done, I put a tag on the fermenter (beer name, brew date) and put the fermenter in the shower in the downstairs bathroom.  The temperature is pretty constant down there, and if something happens with the fermenter during fermentation, clean-up is pretty easy.

Addendum, 23 Mar: About 12 hrs after pitching the yeast, figure 3 illustrates that 'current state' of the beer.  It's bubbling quite nicely, and you can see why I like to use a Gatorade bottle as a blow-off bottle.

Leap day is a good day to brew an IPA... 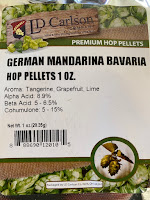 Addendum, 26 Mar: Tried one bottle tonight.  After chilling the beer, opened it to a slight hiss, but the beer poured with minimal carbonation.  The taste of the beer was good, but it was almost (not completely) flat.  I did some research and found a couple of options; one is try flipping the bottles over for three days, then turning them up for three days.  Another option is to try uncapping the bottles and adding a grain or two of dry yeast to each bottle, then re-capping, agitating, and waiting.  I'm going to start by rotating all of the bottles, and see how that goes.
Posted by H. Carvey at 6:11 PM No comments:

It's about time that I use up the remaining GoodBelly StraightShots, and how better to do that than with a sour IPA?

After the boil, rack the wort on to two GoodBelly StraightShots, in a sanitized fermenter, then place the fermenter on a warmed warming plate, wrapped in a towel. 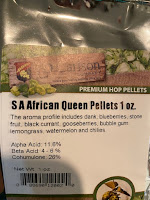 Tasting Notes, 25 Mar: Chilled and opened the soda bottle tonight. Excellent flavor, good body, but only minimally carbonated.  Sours don't usually have much head to speak of, but this beer was very mildly carbonated.  I'm not sure what the issue is, it's something I'm going to need to address.
Posted by H. Carvey at 4:38 PM No comments:

My wife, who loves ginger Belgians, got me some ginger-infused honey for Christmas, specifically to add to a beer.  So...here it is!

Addendum, 15 Feb: Racked to secondary, on 20 ml of tangerine extract.

Addendum, 20 Feb: Bottled today on 2.5 T of table sugar dissolved into 1/2 c boiling water.  Got 9 good bottles and one partial fill of a re-purposed soda bottle.
Posted by H. Carvey at 10:38 AM No comments:

I really enjoyed the Lithuanian farmhouse ale I made not long ago, and wanted to try the recipe with a saison yeast.

Addendum, 12 Feb: Bottled today, on 2 T of table sugar dissolved in 1/2 c boiling water.  Got 9 good bottles, and one partial fill on a re-purposed soda bottle.

Tasting Notes: So far, I've really liked this beer.  It's light, with a good head, and a bit of citrus in the nose.  The flavor is very peppery, which is different.  Definitely a good one to try again.

The first time I tried this recipe, it turned out surprisingly well.  I can't say that I'm usually a fan of British ales, nor of brown ales, but I have really enjoyed this particular beer. It's been easy to drink, with subtle notes of toffee and chocolate.  I wanted to try the beer with a dry yeast to see if there were any notable or remarkable differences, so I asked for insight from the proprietors of my local homebrew supply store.  Their recommendation was the Nottingham ale yeast, as it would reportedly allow the maltiness of the beer to come through a bit more.  However, Windsor (a bit more dry) and S-04 were also good options; in fact, S-04 may be a good option for a third round of this beer.

Addendum, 17 Jan: Maybe 15 hrs after pitching the yeast, I checked on the fermentor and the blow-off bottle was almost full!  The yeast had really taken off!  I used a clean Gatorade bottle with a bit of sanitizer in the bottom for the more active part of fermentation, and ended up replacing the bottle with a new one.

Tasking Notes: Good flavor, good body.  Smooth, the malt really comes through.  The beer isn't as carbonated as I'd like, though...maybe the beer was in secondary too long, or shouldn't have gone into secondary.
Posted by H. Carvey at 4:32 PM No comments:

I got to the point where I had enough wort from different beers left over to go ahead and make a combination ale.  This one has two sours, two brown ales, and a mishmash of different hops, as well as some dried orange peel and crushed coriander seeds.

One of the great things about being a home brewer is that I can not only make beers to have available when what I like isn't "in season", but I can create new beers, as well.  This is one of those beers.

Racked the wort on to ~1 1/2 Goodbelly Straight Shots, and then placed on a warming plate.  I don't want an over-powering tartness, and this will likely be subtle enough to just give a bit of tartness and let other flavors come through.

After boiling the wort and pitching the yeast, I placed the beer on a warming plate.

Addendum, 7 Jan: Put a bottle in the fridge this morning to chill, thinking it would be fine.  The re-purposed soda bottle is clearly under pressure.  However, the beer came out flat, and tasted "off".  I'm going to remake this beer, using US-05 yeast.
Posted by H. Carvey at 2:48 PM No comments: